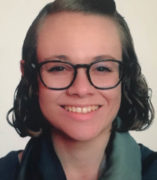 2015  “A Father, A Daughter, and A Fatal Clash of Cultures” Anthropology Department Colloquium –  Grinnell College (December 2, 2015)

I am currently in Amman, Jordan conduting research through the support of a Fulbright research grant and an ACOR / CAORC fellowship concerning the ways in which women’s organizations in Jordan interact with legislative and bureaucratic networks to navigate political spaces, and the implications of those srategies upon the the endurance of women’s civic engagement and the existence of a vibrant public sphere in Jordan. I will be here working on this project until the end of December 2019.